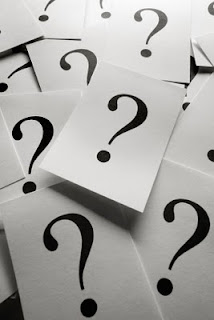 I'm in one of those cyclical phases where my sales have been really slow, which tells me I need to work on my Etsy Shop, and post something on my blog,  and post on my Facebook fan page, and swap out work that's been in the galleries for awhile but I just don't feel like it. Sometimes all the shameless self-promotion gets dreary. Therefore, sales are showing the results of my slackness. And since sales are not happening I don't feel like making anything new, either. Nor do I want to buy any supplies. It's a vicious circle that I'm trying to get myself out of. It's so obvious that my personal ambition level directly reflects how fast things move in my business, because this isn't the first time this has happened, that's for sure.

For a while now I told myself that I was on vacation, or at camp for the summer. Excuses like "it's too hot to fire up the kiln, or the torch" have been going through my mind. And I've had company and been out of town a few times. I could fire the kiln or solder in the mornings when it's cooler. But I don't. The continually sucky economy doesn't help, either, but that could be just another excuse. (Or maybe it's that email that I didn't forward bringing me the bad luck it promised!)  How many times do I have to invent new ways to try to sell my work? And I'm tired. I've been in this business for over 20 years and the spartan life and money worries of an artist are wearing on me. Four and a half years until I can retire, not that I'll ever entirely stop making jewelry.

Now I have a great opportunity facing me and if I don't get myself out from under the ceiling fan I'll miss it. I've been approached by a small chain of stores that's locally based and they're opening a craft gallery next to their original store. If it goes well, they'll expand them to more of their stores. This could be a nice windfall for me if I can figure out how to do it.

The dilemma is that they want to buy my work wholesale. I've never done that before because figuring out how to make a profit when selling at half price is challenging. At half of the price I've set I don't make enough profit to make it worth my efforts. If I double the price I've set, things don't sell.  And it's not fair to have the same items priced higher in one store than another one.

Any artist can tell you that they have things that they make a big profit on and things that are less profitable and that in the large scheme of things it all works out. It's all about perceived value. For example, I have a formula that I use to price my work based on the weight of the finished piece. It includes the cost of the materials (mostly the silver), plus the cost of doing business, which includes paying myself for my time. When the calculating is done I'll look at the final number and decide, based on the perceived value of the piece, if the price is too high or too low, and possibly adjust it up or down a little bit. The other thing about perceived value is that, if a piece doesn't sell, sometimes it moves faster if you raise the price rather than lower it. Weird, huh?

So, back to my wholesale problem. The options I'm thinking about are 1) figure out if there's something that I already make that I can let go of for half price or 2) Come up with something totally new just for them that would be easy to make and profitable. Good thing the woman in charge is on vacation this week because I'm still laying on the couch under the ceiling fan thinking about it. If anyone has suggestions about how to get out of a creative funk during the heat of summer with no air conditioning, please let me know. This has got to stop.
Posted by Zoe Nelson at 10:01 AM 3 comments: 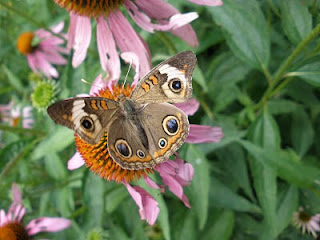 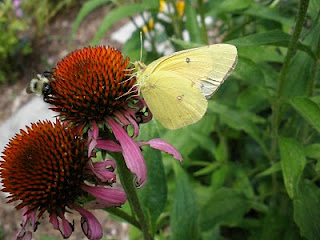 I don't remember another year when there were so many butterflies and so many different kinds! I'm still trying to get a photo of the white one with pale blue markings, but no luck yet. It's interesting how some of them almost know you're there with a camera and spread their wings so you can get a good shot, like the one in the top photo. Others never open their wings unless they're flying off, like the yellow one in the bottom photo. That's a lovely picture, but I wish I could get a picture of the tops of it's wings. They're bright buttercup yellow with grey markings. I guess she's shy.
Posted by Zoe Nelson at 2:59 PM 2 comments: 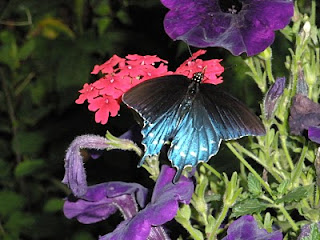 I finally got a good shot of the black swallowtail. The blue part of it's wings are iridescent. Gorgeous!
Today is the day to get busy again in the studio. I mean it. Vacation is over! Sales at the galleries are starting to pick up a little and when I re-stocked at Main Street Gallery yesterday I realized that my inventory is getting low on some things, like earrings. The lower-end  items seem to be what's selling, probably because people are still being cautious with their money. Doesn't matter. I make the same amount of money selling five pair of earrings as I do on one large pendant. 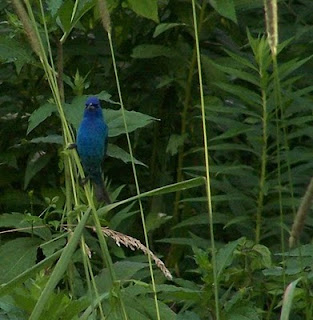 Jenny Williams took this lovely shot of an indigo bunting in my yard when she was here last weekend. Thanks for that, Jenny!
Posted by Zoe Nelson at 8:38 AM No comments:

No excuses. It's my blog and I can ignore it for almost two weeks if I want to! 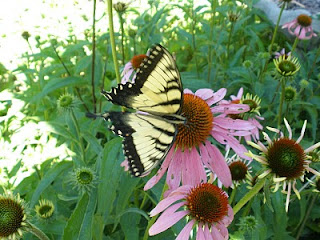 The garden is flourishing, despite the lack of rain, and the coneflowers are full of many different kinds of bees and butterflies. Above is a tiger swallowtail. 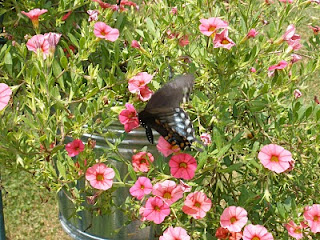 And a black swallowtail. (Sorry it's blurry, but it wouldn't hold still.) 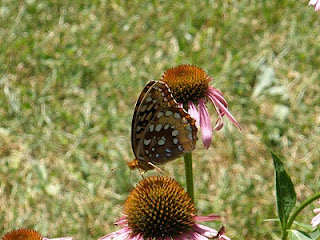 And a gorgeous copper, brown and white one that I don't know the name of. 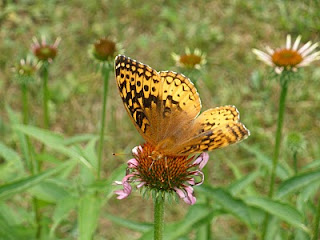 And another unnamed one. These are smaller than the ones in the above picture, have more black, and don't have the white spots.
There's also an elusive white butterfly with blue markings that I REALLY want to get a picture of, but no luck so far.
I had some company this weekend. Two girlfriends that I've known since childhood. We lost contact with each other for awhile, but recently re-connected through Facebook. (Isn't that one of the cool things about Facebook?) We had planned to get together here last March for Chris' birthday, but the weather didn't cooperate, so we gathered at Jenny's house in Lexington, NC instead. The weekend here was a "make-up session" and we had a really good time! They arrived here Friday afternoon shortly before a nice, and badly needed, rain shower that cooled things off significantly.

On Saturday we went to one of the local cheezy gem mines where you buy a bucket of dirt and wash it off in a sluice of water to find the gemstones that they've salted it with. We got some garnets, aquamarines, citrines, amethysts and a few other stones. Chris found a small ruby. (Jenny and I think she cheated, because the bucket of dirt was right by her foot and she was taking extra scoops.)
We had a nice lunch and shopped (thanks, girls, for spending money at Hands Gallery!). The Highland Games are taking place this weekend at Grandfather Mountain, so we saw a few men in kilts while we were out and about. Then we spent most of the afternoon sitting on the porch waiting for wildlife to show up and we took a long walk by the river. Both Chris and Jenny are great photographers and I hope they'll send me some of the shots they took. Especially the ones of me with a different hair style. On Saturday morning Chris plastered some industrial strength goo in my hair and spiked it up like she wears hers. It was interesting. If I get a picture I'll post it and get your opinion. Maybe.
Well, it's nice to be back and I thank you for your patience. It's summer time and the livin is easy, so no promises of when I'll be here again.
Posted by Zoe Nelson at 4:04 PM 1 comment: