Between all the holiday "stuff" I actually finished some pieces that have been on my bench for quite a while. The the toggle/pendant below was one I made the first time I worked with Bronze Clay and finally put together when I found the right shade of seed beads to go with it. 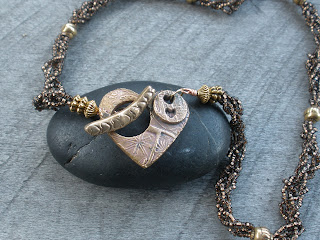 And this one is a conglomeration of several copper charms and connectors that I'd made and had stored up. I decided it was time to do something with them. I put them together with some copper chain and some etched jasper beads. 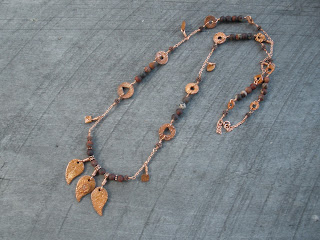 And, a silver ring that was an idea in my head for a long time finally came to fruition. 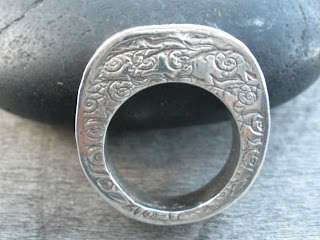 So, that's it for the year, folks. I'm not going to be working on jewelry for awhile because the season is over and sales won't pick up again until the tourists return in late spring. Our Blowing Rock gallery closes for the season (it doesn't pay to heat the place) and I can put that inventory in the Boone gallery.
It's not like I don't have enough to do - the projects are all crowded in my head - more to come on that subject soon. I hope everyone has a happy New Year!
Posted by Zoe Nelson at 4:47 PM 2 comments: 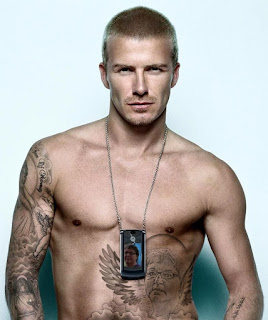 Happy Holidays, everyone! Here's a little Christmas eye candy for your enjoyment. Be sure to look closeley at the tattoo on David's ab.....

I've been having fun with http://www.photofunia.com/ They have several templates that you can imbed your own pictures in. Wouldn't it be cool if the President had a picture of me? 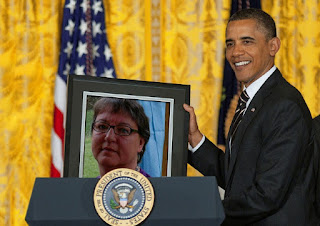 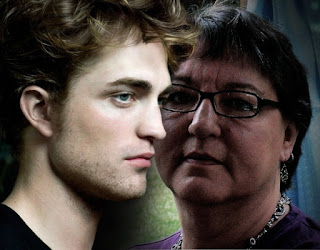 ﻿I've done some with my friends' faces and with that, and the "Elf Yourself" video I did with their pictures, they're going to run every time I pull out my camera from now on. I've obviously had too much time on my hands this week!
As usual, I'm going to be doing a lot of driving and a little visiting over this holiday weekend, but it will be worth it to be able to see all of my family. I hope you and yours have a magical Christmas.
Posted by Zoe Nelson at 8:17 AM 2 comments:

Don't Let Rip-Offs Get Away With It!!

I just read this great blog post from Maureen of Cosmo's Moon Jewelry and I wanted to share it with you. I'm copying it word-for-word so that you don't even have to click on the link above to go to her blog, just keep reading. Please be aware of this and DON'T BUY KNOCK-OFF GOODS!! (I just looked at a preview of this and Blogger has messed up the formatting something awful. Please disregard. The words remain the same.)

I'm involved in a few groups of highly talented jewelry designers and metalsmiths. Many of us sell our work online, or at least exhibit images of our work online. This leaves us vulnerable to be copied by big foreign "companies" that are trolling the internet and craft markets for designs to rip off. It is a big problem, for both the designer and the public who are duped by these scammers.

stop © theft in the arts!

Designers of course are being ripped off- their creativity being xeroxed and slapped on an inferior "product", which is equal to outright theft. Customers of these copycat outfits are partially to blame, because they have bought into the theft , lured by false promises and shoddy imitation. It's nothing new- Nike, Luis Vuitton, Chanel, Gucci, Pucci and Fiorucci have all had their designs stolen and sold on the street. The only real difference is that now the pirates are pillaging individual artists instead of corporations (which have the power of lawyers and the money to protect their goods and ideas).


What can a single artist do? Many of us are already undervaluing our work and so doing are under paying ourselves. Even in good times thinking of coming up with thousands to commence a legal defense is usually out of the question.


What can we do? USE SOCIAL MEDIA to spread the word!


We are freshly entering a new era- Illustrated by global changes such as the Arab Spring and protest movements such as the Occupy movement. One person can effectively disseminate information worldwide with very little effort in very little time.


One well written blog post that is shared, one tweet re-tweeted many times, posts in all group pages, across all social media platforms with links and images and discussions can be the starting point for illumination- We as artists can shine the light on this problem, flush out the cockroaches hiding in the corners and effectively educate and warn our communities and customers. All there needs to be is a plan.


Anytime a piece is found to be illegally copied (ripped off) GET LOUD!


Post as many specifics that you can without opening yourself up for legal problems yourself (put the spotlight on the specific company/entity.)


Let other artists know what is going on- ask for a re-post or re-tweet.


Artists- Re-post! the longer the chain of shares and re-tweets the more information is spread through the community, which will keep the conversation going, keep the community vigilant and bring us together as a force to be reckoned with.


Above all- don't let the assholes get you down. Copycats have been around since the dawn of mankind, it's not going away. There is even a truism that says that copying is a form of flattery. (though someone who is losing business because of these rip off hyenas certainly isn't flattered, they are irate- for damn good reason!)


Power to the artists, come together as a community- let's keep this topic on the front burner and get organized to help protect our original designs!


And customers, remember- cheaper really does mean cheaper. If you value handmade, the artist has to get paid! 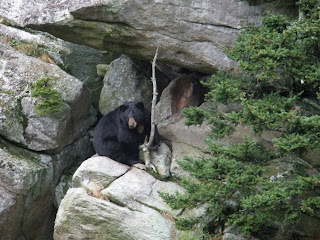 We have a bear in the neighborhood. (Not the one above - I took this picture at Grandfather Mountain last fall.) Something had been getting in my bird feeders (other than the deer that I observed licking seed out of the bottom of the feeder nearly every day) and I thought it was the giant raccoon that I'd seen around because the shepherd's hook that the feeders were hanging from had been uprooted and the seed raided. Then one morning the pole was bent in two and one of the feeders was smashed flat. I don't think a raccoon could do that, not even a huge one! About a week later I was coming home at night and the bear crossed the road in front of my car, headed down the hill towards my house. I'm not ashamed to tell you that when I pulled in the driveway I was a little afraid to get out of the car! So, sorry birds, I can't leave seed out for you any more. And I really miss the birds. :-(
Posted by Zoe Nelson at 7:42 AM No comments: 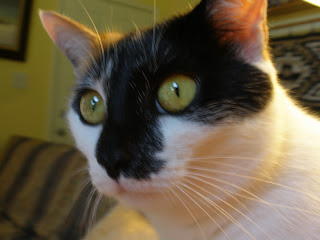 Blogging has been the last thing on my mind this week. Sorry I forgot the Friday Foto yesterday, but luckily, I remembered that "when all else fails, post a picture of your cat".

It's a busy time for everyone right now. I'm no exception, even though I don't have a lot of holiday shopping to do. Every time I think I'm all finished, something else comes up that has to be done/bought and that has a lot to do with Mercury being retrograde. At least I know I don't have to go back to WalMart for the rest of this year and that's a big relief! Have a good week, everyone!
Posted by Zoe Nelson at 8:12 AM No comments: 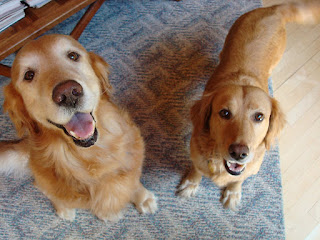 This is Chance on the left and Bella on the right and they're the reason I'm here in Chapel Hill at my sister's house. I'm baby-sitting them for the next few days, along with Smokey the Cat. While I'm spending a long weekend here I'm also hoping to put a dent in the Christmas shopping, since I'm close to the big malls, and visit with some other friends and family. Hot time in the big city! Woo Hoo!
Posted by Zoe Nelson at 8:00 AM No comments:

Don't you hate getting a bad haircut? Soooo frustrating! That's what happened to me yesterday. I guess it's not necessarily a "bad" haircut. It's even. There's no sticky-out parts. But it's way too short! Especially the bangs. Not as short as in the photo above but that's what it feels like. It reminds me of when I was about seven and my Mom used to cut my hair. The bangs wouldn't be even, so she'd cut a little more off the longer side. Then that side would be too short, so she'd cut more from the other side. You see where I'm going with this, don't you? My sister and I called it "bangs in the brains". I know it's just hair and it will grow back out, but this is the wrong time of year to have short hair. It's too cold! She cut the back so short that she had to use the trimmers on my neck. Ugh.

This woman has been cutting my hair for years, and I don't know what got into her yesterday. I told her just to trim it up a little. She must have thought I was someone else. She had my back to the mirror for awhile and when she turned the chair around I said "STOP CUTTING!!" She was quite alarmed and said "I thought you liked your bangs a little shorter." Nooooo!!!

So, now there's nothing that can be done about it. I usually go every six weeks for a trim, but it will be quite a lot longer than that next time. Makes me want to grow it back out down to my ass, like it used to be when I was an Earth Mother Hippie Rainbow Child.
Posted by Zoe Nelson at 10:08 AM 2 comments: