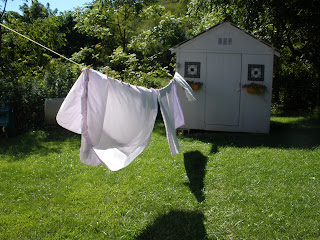 And clean, air-dryed sheets to sleep on tonight.﻿
Posted by Zoe Nelson at 1:16 PM No comments: 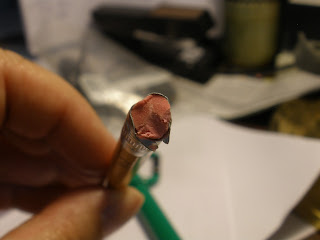 I sure hope I don't make many mistakes! Every pencil in my house that's been casually laying about looks like this, thanks to eraser-loving Lola. And the wooden parts have little tooth marks. I have to hide pencils that have good erasers, or they will end up looking like this, too.﻿
Posted by Zoe Nelson at 10:49 AM No comments:

I didn't realize how long it's been since I posted here. Spring has all of a sudden become summer and I've been incredibly busy. I have managed to find a few minutes here to update you on what's been going on.

I spent a lot of time thinking about what to plant in my new garden beds, but ultimately decided on only a few perennials. In the past when I've made a new garden bed I've gone to great lengths to kill the grass (without using chemicals) before I planted anything. It involves a season of black plastic and then thick layers of newspaper. I realized that there is still grass under all the mulch in these new beds and, since it's the kind of grass with the creeping underground roots, it might be disastrous if I spent a lot of money and planted perennials, only to have grass invade the whole thing. So, I bought a flat of impatiens to occupy the space this summer and I'll put down the plastic in the fall. 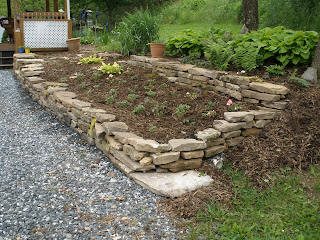 In the above photo you can see that I did splurge on a few things before I made the decision to wait. I couldn't resist the "Orange Marmalade" Hostas, or these variegated Ajuga below: 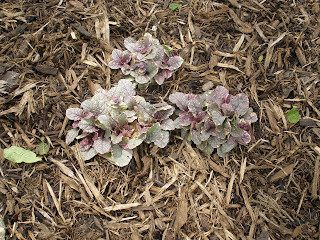 I needed a ground cover between the steps that could stand some foot traffic, so I got these plants called Brass Buttons. They're supposed to be a fast spreader and will have a tiny flower on them in a few weeks. They look like tiny ferns. 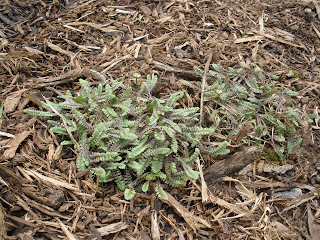 I divided and transplanted some Creeping Jenny from other places in the yard to some of the spaces between the rocks. 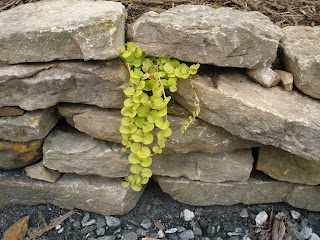 I can also divide some creeping phlox from elsewhere and get it going so it will eventually tumble over the walls.
I planted onions, beans and my second crop of lettuce and arugula in my raised bed. That space only lacks a basil plant to be finished. I have some large pots that need to have annuals in them, but gardening is on hold for a little while. It's time to get in the studio because tourists will be back starting this weekend!
I realized that I was almost out of earrings of every kind. So I spent a few days making both copper and silver ones and I finished over 30 pairs yesterday. That ought to hold me for awhile! I also finished a few bracelets and a couple of rings. All of this will probably end up in the galleries, but I'll try and get photos and post them before they go.
My social life has blossomed, too! I went to my best friend's birthday party last week and had dinner with my cousin and her husband last Saturday. I also had to go to a memorial service for another friend's father and, even though it was not a social occasion, we sent him off in style by flinging his ashes off the top of Kendrick Mountain. Tomorrow I have company coming, so it's time to clean house and start cooking. Hopefully my next post won't take so long.
Posted by Zoe Nelson at 3:05 PM 2 comments: 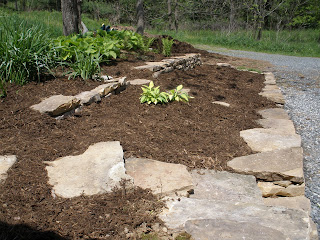 All finished and mulched and even a little patch of hostas planted. As I was trying to plant them I realized that there's a thick mat of grass under all that mulch. I had to dig a huge area to be sure I got all the grass and roots out before I put the hostas in. 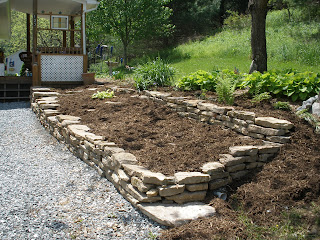 I know it looks too sunny for hostas, but as soon as all the leaves come out on those walnut trees (which I hate, by the way. They drip black gunk onto my car, causing me to have to park on the other side of the driveway from late summer until the leaves fall off in autumn.) it's shady all day long.

And to remind you what this area looked like before: 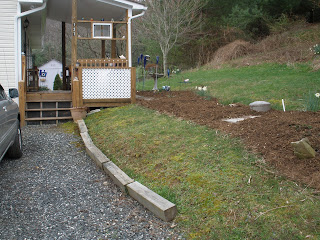 Quite an improvement, right? It's also cool to see how green things have gotten! The "before" picture was taken on March 23 - six weeks ago.

Next month I will have lived in this house for ten years, so I decided that this addition is my home's birthday present. When the house was built and I moved in, the trees were much smaller and the property looked like the overgrown pasture that it is. Now, it looks and feels like a forest, which thrills me to no end. Except for the walnut trees, which I have too many of. (I know - "of which I have too many" sounds pretentious to me.) They're really not good landscape trees. Besides the tannin dripping from the leaves, most of them have been wind damaged over the years. I have 5 of them that the tops broke off of in a bad thunder storm last fall. The squirrels love them, though! I have one small maple that was planted the year I moved in (you can see in these photos) and the rest of the trees are ash and cherry.

So, now it's on to other garden chores for awhile. I'll plant some vegetables in my raised bed and annual flowers to fill in places and to have cutting flowers for the house all summer. Ahhh! I love getting my hands in the dirt!
Posted by Zoe Nelson at 2:01 PM 2 comments:

No work was done at all on Tuesday because "Something Came Up". I've heard that excuse before... But they showed up bright and not so early yesterday and now they're gone and everything's cleaned up. Here's where we are: 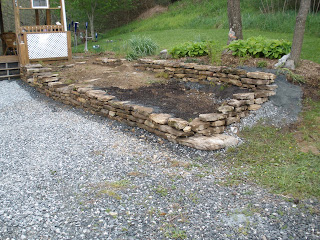 We dumped out some old potting soil on the end to back-fill a little. There were plenty of rocks left and that's why we did the connector on the end. I'll have to get a couple of bags of top soil to fill in a little behind the upper wall. 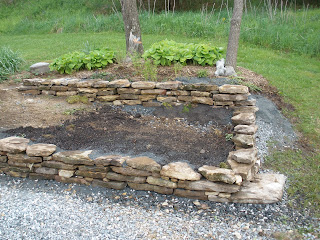 Jamie was so sweet to try and save moss and tuck it in the cracks. I hope it lives -  it's pretty dried out. 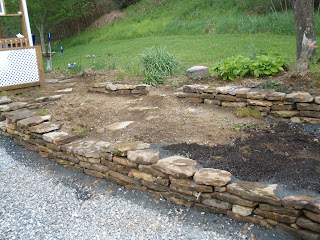 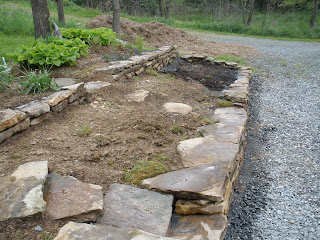 And, on the other side of the driveway: 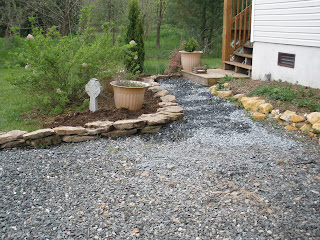 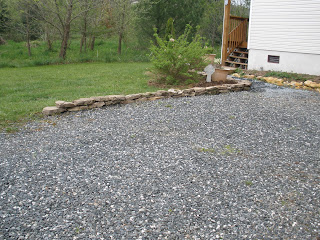 While Dave was here he did some other little projects for me that have been on the list for awhile. He fixed my bathroom sink drain, caulked between the bathtub and the floor, and built a new step on the other side of the porch. It was always just a little low there and I had been piling mulch up to make up for it, but this is much better: 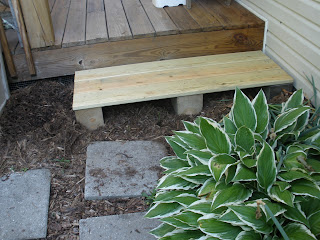 And, remember this picture from last summer? 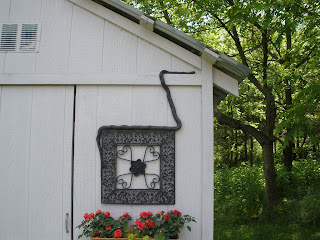 Well, NO MORE, YOU SLITHERY BASTARDS!!
HA!
Now it just needs to be painted. 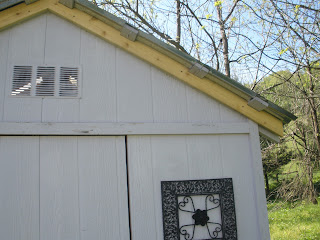 It's my turn to do some hard work now. There's grass to pull/kill in those new beds and mulch to spread to make it look pretty. Then, I'll get to plant some new things. I'm still thinking about what would look good. Any suggestions you might have will be considered, so comment away!
Posted by Zoe Nelson at 11:01 AM No comments: