First Snow of the Season 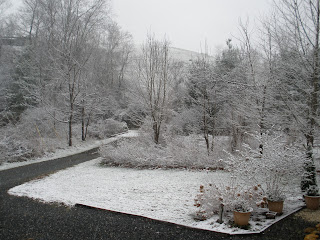 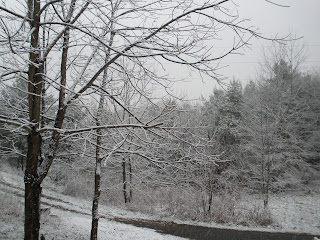 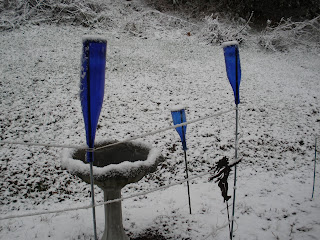 Just a little bit, but enough to be a nuisance.
Posted by Zoe Nelson at 5:19 PM No comments:

We're done with "pre-Thanksgiving" and "Black Friday", so I think today is the last day with a label until we get to "Last-Minute Shoppers". Gack! I'm really sick of pimping my work so that maybe one of you gazillions of people that are online today might buy something. I'm not sure that my little reminders are getting through all the hype and hoopla created by the big chains anyway.

So, y'all know by now that I have an Etsy Shop, right? That's where you can buy my work online. I have a lot of new pieces of jewelry there, as well as a lot of stuff that I've cleaned out of my studio. The "Studio Stash" is listed at incredible prices because I'm selling it for what I paid for it. And silver has gone way up since then. Today only you can get 10% off of anything in the shop by using the code BLOGREADER. After today and until December 15, get free shipping by using EMCFREESHIP. So, if you haven't maxed out your credit card on Amazon.com by now, I would appreciate it of you would consider a piece of hand made silver jewelry to give to someone this holiday season.
Posted by Zoe Nelson at 2:13 PM No comments:

Jumping on the shopping bandwagon, here. This piece is available in my Etsy Shop and you can get a 10% discount if you enter the coupon code BLOGREADER. Sorry! This one has sold, but there are a lot more new listings! And the coupon code works on any of them.

I hope you had a happy Thanksgiving and got to spend time with friends and/or family. Mine was quiet. I went to a buffet restaurant with a friend and ate way too much, but that's part of the holiday experience, right? I'll be nibbling on baby carrots today while I work at Hands Gallery. I hope that people will shop in our small co-op today instead of the big box stores! Happy holiday weekend to you.
Posted by Zoe Nelson at 7:06 AM No comments:


I think I'm back to normal (whatever that is) after my vacation. I'm working at the Main Street Gallery today and it's foggy and dreary and there's not many people here. Good day for a blog post!

The holiday season is approaching fast! Only a few more days until Black Friday and the craziness of holiday shopping after that. I have been and will continue to ramp up my Etsy Shop for Cyber Monday and beyond. Listing lots of new things and renewing old ones, striving to be at the top of search lists. And I still have a lot of Studio Stash listed at some great bargain prices. Here's a couple of new ones recently listed:

Do yourself a favor this year and try and avoid the malls and the big box stores. If you shop at small, independent retailers you'll have a more relaxing time and more of your money will stay in your community. Or, shop online with your favorite jewelry artist!

If you've read this far, I have a reward for you. Many of the members of the Etsy Metal Clay Team are offering free shipping through December 15. You can use the coupon code EMCFREESHIP to get that in my shop or any of the other EMC Team members' shops. If you order after December 15 your purchase will need faster and more expensive shipping in order to arrive in time for Christmas. And, as a special "thank you" to my blog readers, use the code BLOGREADER to get 10% off in my shop only.

At this time of giving thanks I want to say out loud that I am so grateful for the people who appreciate my work and who take the time to come here and read about what's going on in my life. I hope you have a wonderful Thanksgiving holiday.
Posted by Zoe Nelson at 2:19 PM No comments: 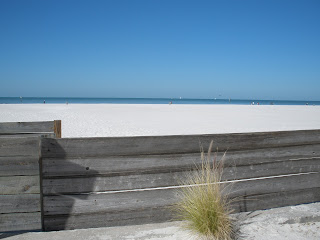 I got home late Thursday from my birthday cruise to Mexico. What a fantastic trip! My sister and I flew to Tampa, Florida on the 11th and had a nice lunch with our only remaining aunt and uncle the next day in Clearwater. We boarded the ship later that afternoon and set sail at 4:30. Many people gathered on the helipad deck to watch us go under the Sunshine Skyway Bridge - we had 9 feet to spare. Then, across the Gulf of Mexico. It was quite rough, but luckily I don't have trouble with sea-sickness. 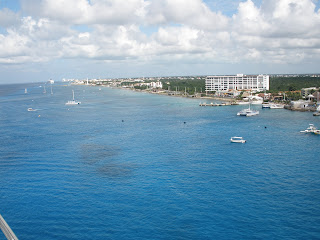 Our first port was the island of Cozumel. It was beautiful from the ship, but not so much when we got off to do a little shopping. It's really not much more than a tourist trap and they're so aggressive about trying to get you to come into their stores and buy from them. I was not impressed. 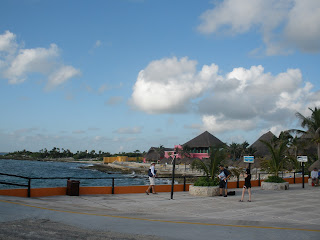 Our second port was Costa Maya, which I found out didn't even exist ten years ago. The property was bought by the cruise ship lines and developed for tourists. Again, not impressed, but at least this was newer and cleaner. We didn't do any shopping there, as it was the same junk shops as in Cozumel. Our reason for getting off the ship was to take a 2-hour bus ride into the interior to see the Kohunlich Maya Ruins. 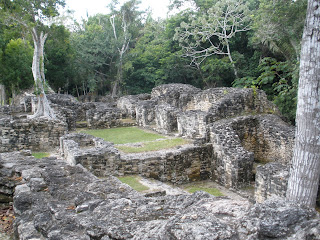 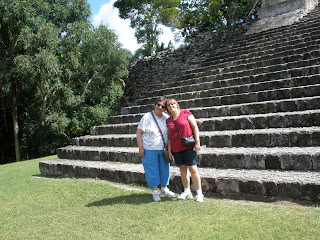 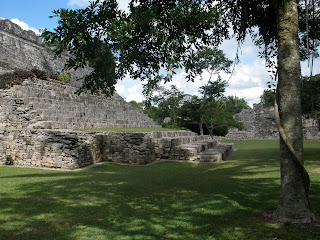 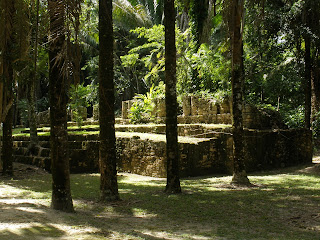 We had a fantastic tour guide and I found it to be very interesting. He pointed out wildlife and explained what was known about the Maya culture. We saw moths that looked exactly like the bark on the tree and you wouldn't know they were there unless someone pointed them out to you. We saw snakes, howler monkeys and lots and lots of rocks. It's hard to believe that the Maya people just abandoned these impressive cities and disappeared.

When the tour was finished and we got back to the bus for our return to the ship, the air conditioning was not working. And, boy howdy, was it hot and muggy. Apparently, a belt had broken. So off we go with the windows open for about 20 miles, when we see another tour bus headed towards us. The two buses stopped in the middle of the road and the driver of the other bus handed ours a belt. We pulled over and five minutes later we were riding in cool comfort. I was glad that our driver was also a mechanic - it was 91 degrees! 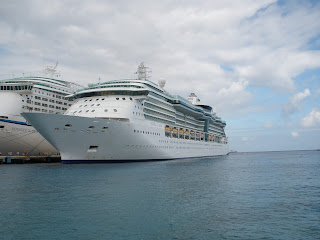 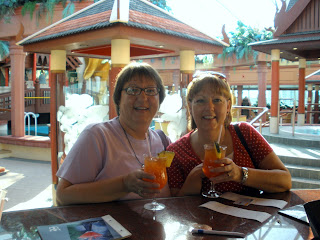 Our ship was the Jewel of the Seas and one of the first things we did after boading was get a fruity drink. Later, I found out I really like Champagne Bellini's and so we hung out at the Champagne Bar in the evenings after dinner to drown our sorrows from losing money in the casino. I won my money back on the fourth night, so I didn't gamble any more after that. 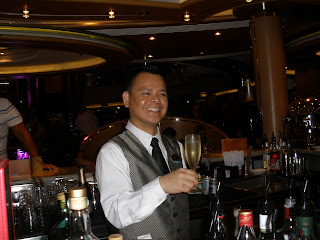 The staff was friendly and helpful (especially Lorenzo, who insisted on mixing up lots of "medicine" for my twisted knee after the day climbing around the Maya Ruins.) 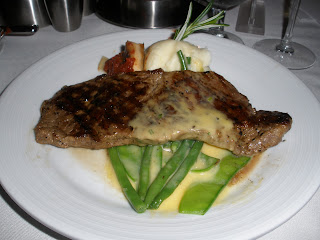 And, of course, you can't go on a cruise without experiencing the incredible food. Both in deliciousness and quantity. I swear, now I don't want to eat a thing... until Thanksgiving, that is... then Christmas... uh oh! This could be bad. I already know what my New Year's resolution should be. 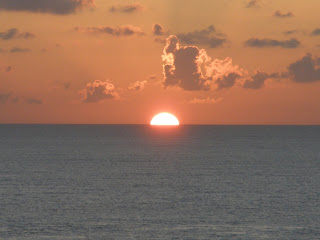 But, we had a marvelous time and now it's back to reality. So far, I've made it through the giant pile of mail and done two loads of laundry. Now, since I got used to taking a nap every day, I think I need to go lay down. I swear, I'll get back to work on Monday!!
Posted by Zoe Nelson at 2:22 PM No comments: 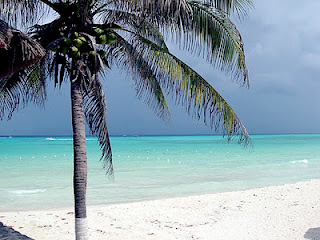 I will be away for a week or so because I'm going on the first real vacation I've had in 11 years. Whoopee! I have one of those zero birthdays coming up, so several months ago my sister booked us on a cruise to Mexico to celebrate. This is great. It gets me away from all my sneaky friends that might consider giving me a surprise party!


I. do. not. like. surprises. I get so embarrassed and emotional and sometimes go into the “ugly cry”. I was finished with surprise birthday parties after my 40th, when my ex-husband and my Mother organized one for me. Fred got me away from the house so that preparations could be made and when we got back and everyone hollered “surprise”, there I stood, shocked, in grubby clothes, no makeup, and hadn’t had a shower that day. And, Mom invited one of my old boyfriends. I burst in to tears that I’m sure everyone thought was surprise, but I was pissed! I swore if anyone ever did that to me again there would be hell to pay.

It’s hard to believe that it’s been so long since I’ve taken a vacation. There are lots of reasons, I suppose. Money is tight, life situations don’t allow for it, I don’t want to go by myself… And, I get to live in one of the most beautiful places on earth all year round. But, for some reason thinking about this trip has me believing that I’ll be doing more traveling in the not too distant future. I have a couple of ideas in the works and I’m hopeful that they work out. I’m not getting any younger, you know, and there are things I want to do and places I want to see while I still can.

So, while I’m relaxing with a fruity drink and watching the ocean and thinking about the fact that it could snow here while I’m gone, I hope you remember to take some time for yourself also. My Etsy Shop will be on vacation, and Friday Foto suspended. See you when I get back!﻿
Posted by Zoe Nelson at 9:06 AM 1 comment: 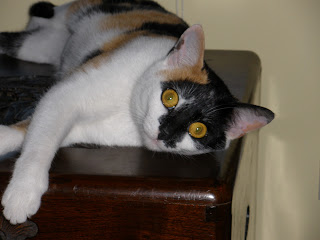 Tomorrow it will be one year since Lola showed up on my back porch hungry, injured and very vocal. I'm so grateful for her company!
I'm feeling... well... kind of "pissy" today. I want to crawl inside my shell and hide for a while and not deal with people, so that's what I think I'll do.
I hope you have a great weekend. I'll be back next week after I crawl out of this mood.
Posted by Zoe Nelson at 10:38 AM 2 comments: