Have you been noticing the wrap bracelets that celebrities are wearing now? I looked them up and they're made by a designer named Chan Luu and they're extremely expensive. Hundreds of dollars. 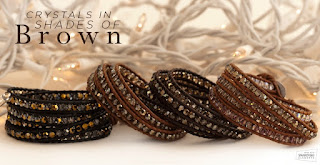 
This one has the gemstones laddered between two lengths of leather cord like the Chan Luu bracelets, but also has sections of woven Chinese knotting cord, giving the bracelet a lot more color. Plus, it wrapped around the wrist five times! The list of "ingredients" and instructions for how to make one are on the website.

That got me thinking... I had some leather cord and lots and lots of beads to choose from. I didn't have Chinese knotting cord, but I did have a huge wad of tangled up embroidery floss in every color imaginable. I also had some silver buttons that I'd bought 20 years ago for some kind of project but had never used. ﻿You know where this is going, don't you? 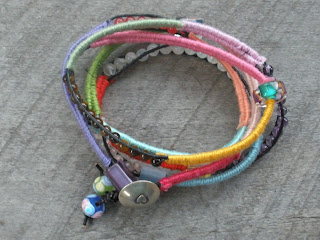 This is the first one I made. I used random colors and some beads that seemed right.

I had so much fun making it that I made another one. This one I planned out and tried to use coordinating colors: 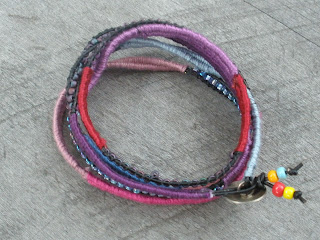 Posted by Zoe Nelson at 5:40 PM No comments:

Here's my latest Etsy shop listings. I'm also using Blogger's new iPad app, and I can't see how to link to the shop, or the listings. So, look over on the right side bar and you'll see how to do that. 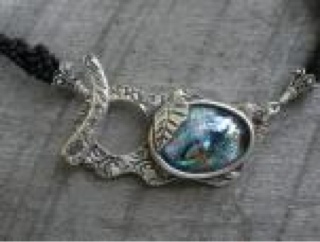 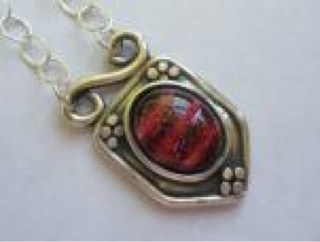 Happy Birthday To Me! 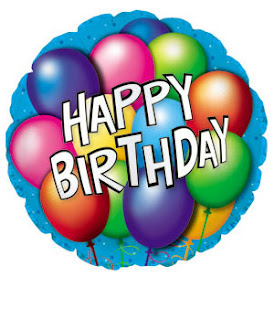 Last Saturday was my birthday, and I certainly felt special! My sister came to stay for the weekend and we did the tourist thing around downtown Boone, including a shop called the Art of Oil. They have olive oils and vinegars that you can taste and they'll recommend pairings. I brought home some of the pumpkin pie spiced balsamic vinegar, which should make yummy salad dressings this fall. Then we went out to dinner and came home, changed into our jammies, and watched a chick flick and drank wine.

After she left on Sunday some folks picked me up and we went to the movies. We saw "Lincoln", which I thought was excellent and I think there will be several Oscars from that film. All in all, it was the perfect birthday weekend.

The Trunk Show in Charlotte is shaping up. It will be at my friends Douglas and Kimberly's house in the University area on Saturday December 8 from 12:00-4:00 and Sunday December 9 from 12:00 to 3:00. If you need directions, contact me and I'll email them to you off this blog. We don't want her address plastered all over the internet.

It's also time for shameless internet self-promotion. I don't have the advertising budget that the big boys have, but I intend to use every free venue I can find to get my jewelry in front of people. Hopefully they'll think of me when they need that special gift of a one-of-a-kind piece of wearable art for someone. I plan to be quite visible.


Thanksgiving is coming up this week. I truly am thankful for all of you that take the time to read this little blog and I hope that you have a wonderful holiday. Don't eat too much turkey! But, if you wind up in a turkey coma you can always shop my etsy shop! (See? It starts already!)
Posted by Zoe Nelson at 3:32 PM 2 comments:

So, again, it's been a long time since I posted and there's been a lot going on. First we had a bad storm that they're now calling "Superstorm Sandy". You all know how horrible it was in the north east, so I won't complain too much about the snow that we got. It was too early and that's my only complaint. I got about 4 inches here on the east side of the county, but the west side got a lot, with high drifts. The wind was scary and I prepared for a power outage, but that didn't happen.

Here's a delightful "small world" story for you. Last June I met fellow jewelry artist Donna Whiteside at the PMC Conference in Cincinnati and after the conference we Facebook "friended" each other. Earlier this week she posted that she was camping near Boone, NC. I posted that she was near me and to contact me if she wanted a list of fun things to do. Then another friend of Donna's, Jeanne, piped up and we discovered that Jeanne has known my friend Brenda (who also lives here) for 30 years. So this morning  Brenda and I met Donna and her wife, Linda for coffee and talked to Jeanne on the phone. How cool is that? Wasn't there a movie, Six Degrees of Seperation, that said that everyone is just six steps away from knowing every other person in the world?


I finished teaching my last class this week. It was bittersweet, but I know I made the right decision to stop teaching, at least through the University. I have a group of women coming in January for private lessons here in my studio and a couple of the students from this last class said they might be interested in individual instruction. That's the way to go for me if I want to make any money at it.

Since I had to fire student work every week I actually got quite a bit of my own work done. I made four more pendants in my flower series, three with glass and one with an opal. I don't know why I love making these little suckers, but I do. 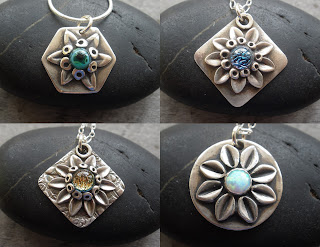 And a few others, to boot. Upper left has a pink sapphire, which didn't turn out so great in the picture. Upper right has a blue topaz. Lower left has a black onyx bullet and I think this would look good on a man. Lower right has a lab ruby and my mixed texture. 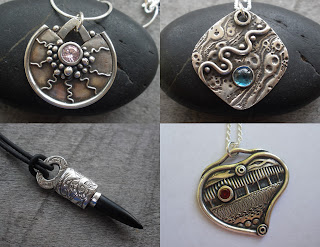 I didn't post much about the election here, or on Facebook, because it's all so exhausting to me and I'm horrified by our country's lack of control over campaigns. But, I will say that I am over the moon that we are keeping Barack Obama for four more years. It's great to have a smart, kind and compassionate man running the country.

I have a trunk show coming up in a few weeks, so those of you in Charlotte be on the lookout for details on that. I think that over the next few days I'm going to be on this computer a lot. I need to edit photos and get the ole Etsy Shop ramped up for the holidays. I've decided to sign up to take gift cards and for the direct pay option. We'll see if that helps sales.

I hope y'all are having a great day and I'll try not to be away so long again.
Posted by Zoe Nelson at 3:37 PM 2 comments: