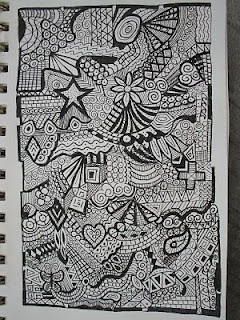 I've been a doodler forever. Black ink on white paper, filling as much empty space with designs as possible. I thought I might have a mild form of Horror vacui, (cenophobia). It's the way I occupy my mind and my hands when the TV is on, and passes the time when I'm working in one of the galleries and business is slow. I've always been a fan of M.C. Escher's graphic work and optical illusions. One of my earlier ones is above. I also did a few around words, with a little color: 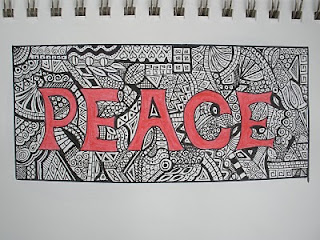 Recently I read a blog post by Catherine Witherell, who makes beautiful art journals, and found out that I'm NOT THE ONLY ONE! And that these things have NAMES! They're called either Zendoodles or Zentangles and the internet is covered with them. There are YouTube videos out there (see my previous post) and I found a Flickr group containing thousands of them and saw many of the patterns I've used being done by others. 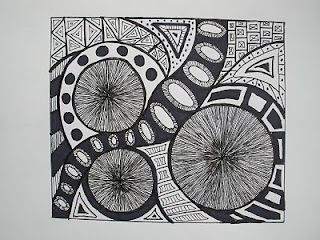 The first one shown in this post took days to complete because it's tee-tiny. So is the "Peace" one. The desire to do these comes and goes. I'll work on one for a few days, a little obsessively, then the pens and the sketchbook are put away for awhile. I had just done the one above when I found out that (seemingly) everyone is doing this. I have mixed feelings - a little like the world has stolen what I thought was mine - and the joy that there's so much inspiration to carry this even further: 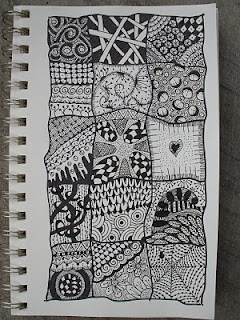 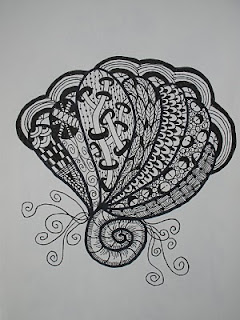 I found out that by simply drawing a shape with a large pen, or dividing the page into sections, and filling in each section with a different design makes the work go so much faster and, I think, a more interesting final product. I guess it's true, though, that there really aren't any new ideas.
Posted by Zoe Nelson at 3:21 PM

I'm in awe of your talent for this. I could stare at these for hours!

isn't wonderful when you find out your a bit normal. Love the doodles, I do them all the time myself ;) Feels a bit productive when they have name.

Oh this is so funny!!! Found you on Andrew's blog comments just now so thought I'd stop by...

I sent the same email to my daughter when I saw the Zentangle article! Who knew???? that my obsession with very deliberate doodling actually has a name and can be considered a form of therapy? I have a whole new respect for my silliness.

And now, to check out your blog. Looks very interesting so far and the name Artwear is perfect.

Those are extremely cool, Zoe. Bet Freud would have a ball with them!

These are gorgeous Zoe. I could have told you that you were normal!

These are great... and yes, who knew? Guess this whole doodle movement makes me normal too (phew!). I've been doodling like this forever and just read about this "zentangle" phenomenon - "everything old is new again..." thanks for sharing.